Miguel Montalban, Once Upon a Time at Piazza Navona 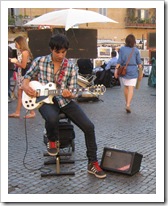 Merry voices at Piazza Navona, Rome, didn’t swallow sound of jazz guitar which was played skillfully. My ears followed the sound and found a guy played his guitar at the heart of Piazza Navona. When I stood around, a girl came up and showed me a self recorded CD, “Miguel Montalban is the best student at Conservatoria di Musica.”

Then we talked about Miguel’s music. The girl – her name was America – was a great promoter. She told me about Miguel’s music, his qualification, and why he played music at Piazza Navona. Not many Italian people could speak English, but America spoke English very well and made me interested to write about Miguel Montalban for www.salamatahari.com. “You can mail him anytime,” said America before I left.

So I made an interview with Miguel via email:


Hi, Miguel, when did you start to play music?
It was many years ago, I just don’t remember exactly, but my grandfather gave me a piano on Christmas when I was 7 years old. It wasn’t what I really wanted, because I wished to get an acoustic drum set! Anyway, that was an interesting beginning.

Did your family influence your musicality?
My oldest brother had started to play guitar three years before I played guitar. My uncles who always around singing folk songs and listening blues or Woodstock stuffs, so I guess that could be the most influential things in my musical life…

And when did you start to play guitar?
I played guitar at the age of eight. At that time, I was a fan of Slash (Gun’s n Roses guitarist) and many famous rockers from MTV videos. They were rockin’ with a guitar and singing out loud. I also think that guitar was the most versatile instrument.

Do you play another instrument beside guitar?
I able to make nice sounds with many instruments such as strings, piano, and percussions, but the electric guitar always become my main instrument…

Ok. What is the secret of guitar that you know but most people may never know?
I guess the “secret” is something between style, knowledge, and the musical taste. Sometimes the notation that played in certain stylish way sounds nice, but in the other time the same not sounds like a crap. It depends on when and where you play that “lick” or “full” or note anyway. It always has a risk. “Secret” must be something you want to hear in your best song.

And what is the most mysterious song you’ve ever written ?
My most mysterious song … well …. I guess … “Father”. It was written when I lived in Turin, very hard and lonely days. It came out spontaneously. I didn’t think any word to write. I don’t know why or how it came to me, no technique there. After that, I remember that I started to create many other songs… I suppose, it was something personal I had inside for years.

Tell me about your musical background …
Well I always create music and record new ideas. This year, I started to record my first album with ANDES EMPIRE after several shows around Italy last year. In order to promote myself as a guitar player, I use to go to Piazza Navona and play my guitar 3 blocks of 40 minutes each, around 4 times a week. Sometimes the weekly routine has to change for some music shows and events. On Thursday and Friday, I have to attend the "Conservatorio di Musica Santa Cecilia". I’m a regular jazz guitar student.

And America supports your promotion?
Yes. She is my partner and we work together. And I have to say that she is an excellent drummer too! After our work in the Navona Square, sometimes we have to rush to take the bus to rehearse our music in the studio. When both of us - America and I - have tired, we would take a free day or plan to make our weekend. ANDES EMPIRE is our band, and we are currently recording our first album. What is the secret of music you’ve found along the way?
Music helps to throw out all you have inside yourself. It also helps you to try to be careful and honest to yourself. It helps you to throw what you gotta say, sometimes without thinking. That mechanism is a great secret for me.

Language is limited. But music will tell you many things, more than words can say.
… so find yourself the secret of it by clicking Miguel’s links … ;) 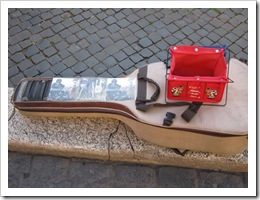